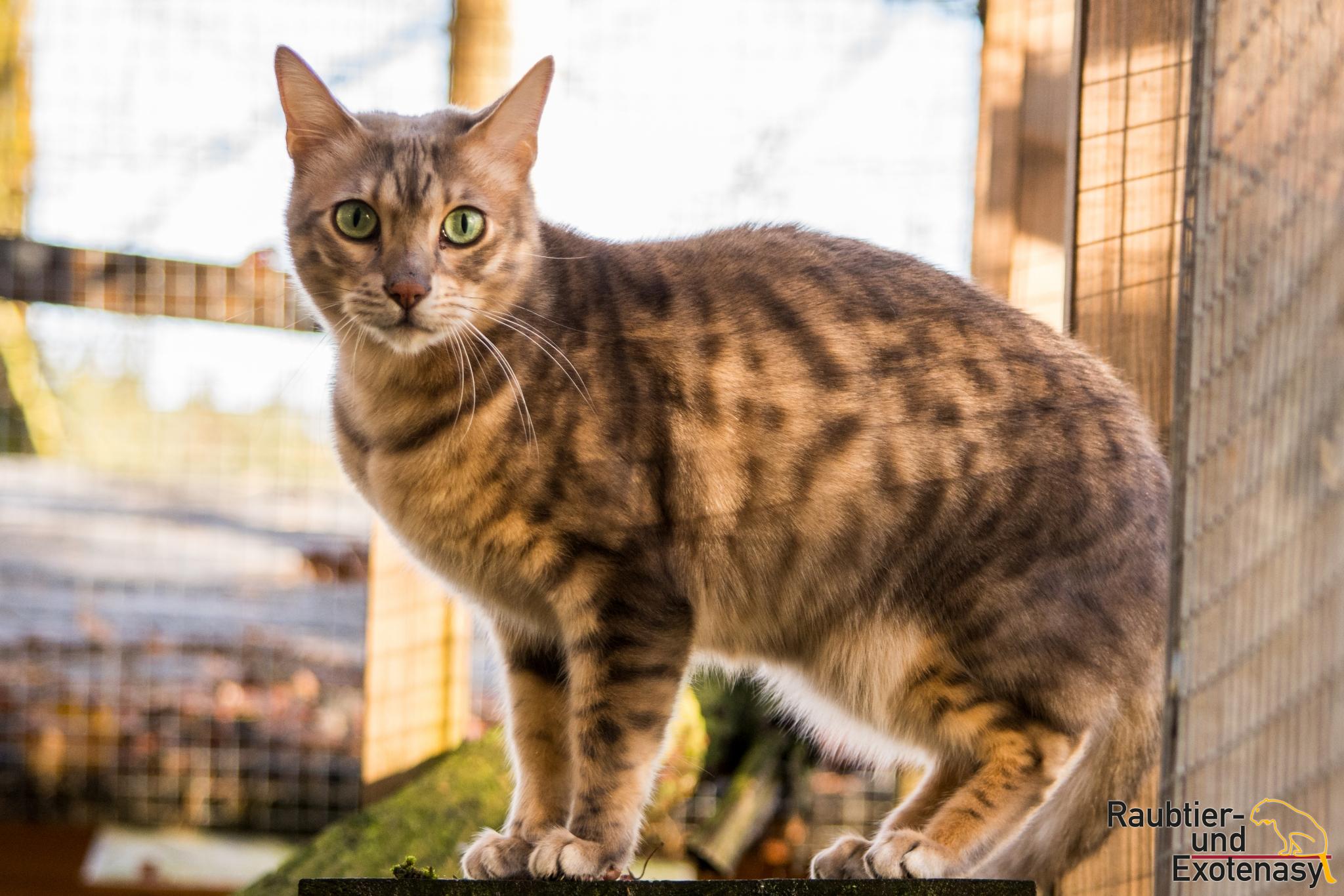 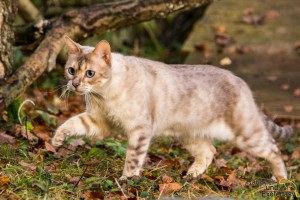 In March we got a phone call if we could take in two Bengalcats F1. Their owner has cancer and has searched for a new home for them for months but since F1 hybrids need to be given into special care in Germany she couldn’t find anyone with the required qualifications to take them over. We decided to take those two cats and their buddy Lumpi (a normal MainCoon) (click here for old page) in and renovate Finja’s outer enclosure for them. For the inner enclosure we put up a wooden lodge and a fence for the outer enclosure covering an area of about 30 m². We were able to finish building the enclosure before they joined us on 14th April 2015.

Taking them in cost the Sanctuary about 2000€. Thank you all for the donations and thanks to the volunteers who helped build the enclosure!

Shiwa loves being petted which is pretty unusual for a F bengal cat. Since the death of his two companions Shiwa felt pretty lonely so we started to search for new roommates. However we couldn’t just take in any house cat but one – or more – who really needed our help.

Our federal service volunteer kept her eyes and ears open and found two bengal cats – Toby and Percy – who were searching for a new home. They came from a breeder for bengal cats who kept his cats very badly: 14 cats in one small cage. The police took away all his cats, his license for breeding and keeping cats. Toby and Percy lived with a woman who wanted to find a new good home for them for some months before we found them. She told us that they were used to kids and had no problems with dogs. Best preconditions for socializing them with Shiwa.

We installed a separate cage inside our cat house to make it easier for both parties to get used to each other. However we didn’t even need it. All three got along at once! They even ate out of one bowl – we still have two for them, just in case.

Toby and Percy are very active cats. They love the attention from our visitors and enjoy a stroll through the outer enclosure. They’ve been nice to Shiwa from the beginning without even one fight – and vice versa. They evolved to really enjoy the cuddles from all humans.

On 13 October 2017 we had to say goodbye to Shiwa since his cancer got too severe to give him a painless life.

Bengalcats are hybrids: They are a crossbreed of the asiatic leopard cat and short haired house cats like the Egyptian Mau or the Abyssinian cat. The leopard cat is a small wild cat and thus Bengalcats are so called hybrids. The F1 toms are sterile. The breeding of hybrids is a much discussed topic and not always positively. We as the sanctuary do not support breeding hybrids, for once because often the parental cats are illegally caught and sold. And of course the breeding act and the birth can be very dangerous for the house cat since the wild cats are often bigger than the house cats (e.g. Savannahs and Caracats).

To keep F1-3 hybrids in Germany you have to abide by stricter laws than when you are keeping a cat, since the hybrids behave a lot like their wild cat parents. Their needs are a lot higher than those of a normal house cat. That’s the reason why we took in those two F1 Bengalcats and to not separate them from their friend we took him in, too.