Kalaharia lived at a reptile shelter in Munich after the officials sized her. In November 2013 they contacted us if we could take her over. After we made sure that we would be able to provide for all her needs we agreed. On March 25th she arrived safely at the Sanctuary (see German page for a video documentation). 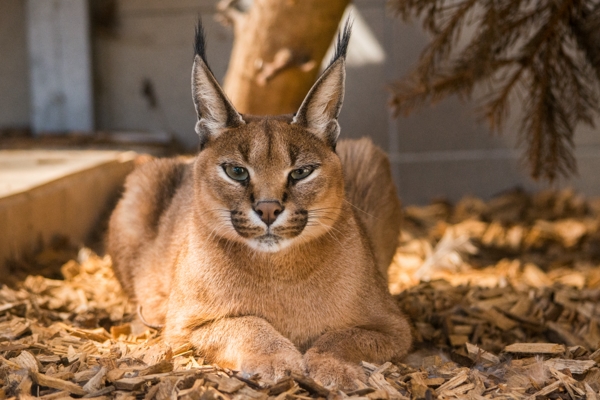 Kalaharia is blind on her right right eye, however this isn’t much of a problem to her. She is very suspicious of un-know people and greets them with a fierce hiss. After all she is not a pussy cat to keep at home even if she only weighs 11kg which is only a fraction of our tigers and about as much as a fully grown Main-Coon cat.

Since the natural habitat of caracals is east Africa, Kalaharia needs a warm enclosure for colder months or evenings. For this purpose we installed an electronic thermostat which is configured to shut itself down to prevent over heating and Kalaharia from burning herself. We also built a sleeping box for her which can be heated seperately to cut down heating costs during night. All doors have been isolated or reduced to minimize heat loss.

Kalaharia has settled down really well after her move (for German documentation see here). She is very curious and thus can be observed exploring her enclosure frequently. However the first Open House was a little too much for her – who can blame her when more than 1300 visitors stare at you? – and she retreated into her inner enclosure most of the time.

Her’s and Pünktchen‘s enclosures are separated by a small gangway.