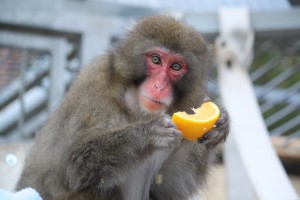 James and Nala are from a private animal park and arrived at the SPEA in 2011. Due to the fact that their old enclosure was not species appropriate, the animals developed behavioral disorders and became very aggressive towards each other. This caused us to separate them when they arrived because James had already inflicted severe injuries upon Nala. Not doing so would have resulted in her death. We gave our best attempt at caring for them intensively so they wouldn‘t suffer of loneliness. For this purpose the keepers play with them and entertain them by hiding their food or giving them challenging goodies such as nuts which have to be cracked first.

Since James calmed down a lot and Nala regained her self-consciousness we risked a reunion in July 2013. After James made sure that he was still the one in charge – with some short fights where he pulled out some of Nala’s hair – the two of them get along really well. James even regularly delouses Nala which is a gesture of affection and closeness. 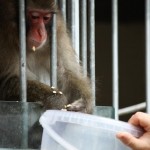 Although very shy and timid at the beginning, Nala has gained back her self-confidence in the absence of James up to the point where she seeks body contact with her caregivers and enjoys being fed by hand. „Her“ keepers are so important to her that she gets upset easily when other animals command their attention. She is especially jealous of women, she might even demonstrate this fact with a bite.
In an intact group of Japanese macaques in the wild there are usually animals who have more to say than others. In such a group weaker apes try to help each other out by delousing each other, fetching food and cuddling. In a group of only two animals Nala was the only subordinate animal. That‘s why body contact with the keepers is especially important for her. 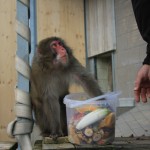 James grew up without any contact to humans and thus doesn‘t know how to play with them. He, too, has become calmer since arriving at Wallersdorf. Although he does not seek body contact he likes being near the keepers. This behavior is absolutely normal for a macaque since the keepers symbolize higher ranked apes for him. Despite showing them respect, „cuddling“ would be too intimate a gesture to share. 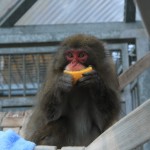 James and Nala are the undisputed and beloved favorites when kindergarden groups come visit SPEA, who get to learn a lot about their food habits from the two apes. We regularly receive food donations for the two apes. However, not only groceries such as fruit, vegetable, nuts, organic muesli, seeds or dried bread is on their menu: the two also enjoy a good bout of leaves or bark as much as anything. Watching children and macaques eat, there are a lot of similarities to be observed: They eat the “best” or tastiest things first and save the very healthy food until nothing else is left over. Children visiting us always have a lot of fun spotting these similarities between themselves and the animals. And if someone doesn’t quite believe how strong the apes are? Not a problem, James and Nala are more than happy to demonstrate how sharp their teeth are by cracking a walnut with just one bite.

Nala‘s mother, Shila, arrived together with the pair in 2011. Sadly enough, the mother ape died in 2012 of an apoplectic stroke at the age of 21. In the wild Japanese macaques can reach up to 20 years; in captivity they can even become up to 30 years old.

No primate – with the exception of humans – has managed to endure a more northern or colder climate than Japanese macaques. They live in groups that range between 10 to 160 members, although the average group consists of approximately 40 members per group. Within such a group-size the more subordinate primates can help each other out should one of their own be harassed by a higher-ranked macaque.