In March we got a phone call if we could take in two Bengalcats F1. Their owner has cancer and has searched for a new home for them for months but since F1 hybrids need to be given into special care in Germany she couldn’t find anyone with the required qualifications to take them over. We decided to take those two cats and their buddy Lumpi (a normal MainCoon) in and renovate Finja’s outer enclosure for them. For the inner enclosure we put up a wooden lodge and a fence for the outer enclosure covering an area of about 30 m². We were able to finish building the enclosure before they joined us on 14th April 2015.

Taking them in cost the Sanctuary about 2000€. Thank you all for the donations and thanks to the volunteers who helped build the enclosure! 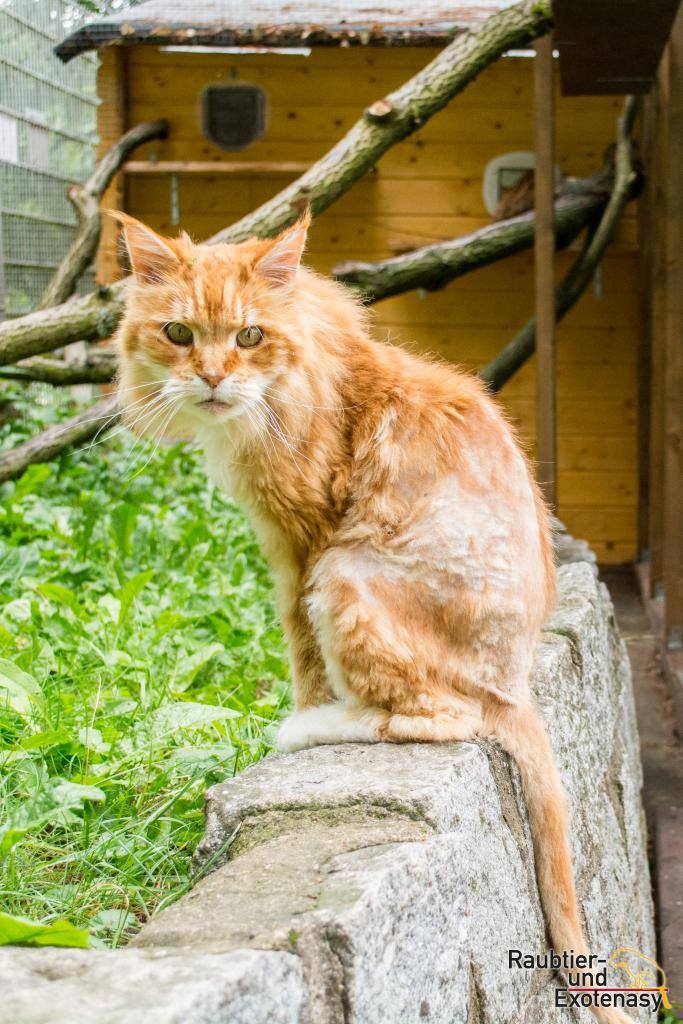 Lumpi (Ger.: shabby) is a typical house cat and loves to cuddle. Unfortunately his fur was so tauted that we had to shave him. His fur is growing back really well now and we are trying to getting him used to a brush again. We had to put Lumpi down on 4th January 2016 due to kidney failure.

Shiwa and Pandora can be petted as well, though not always willingly. They just don’t enjoy it as much. The two Bengal cats are tame enough – as long as you behave appropriately around them – so you can go into their enclosure safely. We try to do this as often as our free time allows especially to give Lumpi the tender and loving care he is used to from home. Pandora died a sudden and unexpected death on 19th January 2016. Shiwa misses his two partners terribly. We are working on a solution to improve his situation.

Bengalcats are hybrids: They are a crossbreed of the asiatic leopard cat and short haired house cats like the Egyptian Mau or the Abyssinian cat. The leopard cat is a small wild cat and thus Bengalcats are so called hybrids. The F1 toms are sterile. The breeding of hybrids is a much discussed topic and not always positively. We as the sanctuary do not support breeding hybrids, for once because often the parental cats are illegally caught and sold. And of course the breeding act and the birth can be very dangerous for the house cat since the wild cats are often bigger than the house cats (e.g. Savannahs and Caracats).

To keep F1-3 hybrids in Germany you have to abide by stricter laws than when you are keeping a cat, since the hybrids behave a lot like their wild cat parents. Their needs are a lot higher than those of a normal house cat. That’s the reason why we took in those two F1 Bengalcats and to not separate them from their friend we took him in, too.